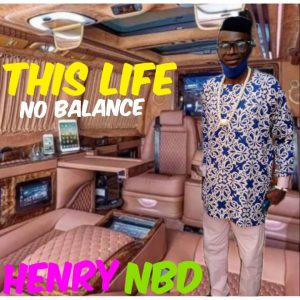 Speaking about the song, He said
This is a song that makes many women and children understand the challenges and circumstances confronting most men as they sojourn in life.

They should see their husbands and Fathers as ones who meant well to the family but due to the economic situation of things coupled with a lack of connections and opportunities, they were not able to meet up with some of their obligations. This song has so many messages to be learned and the melody
Hit the download button as you listen, download and share

For over 19 years, he traversed the length and breadth of Nigeria and some West African countries preaching peace while holding his gun. Oftentimes, he denied himself the pleasure of life.

Besides, during his very glowing service years, his romance with the newsroom at the Directorate of Army Public Relations, Bonny Cantonment; though without some doting challenging moments, he exuded excellence while doing his work with candour.

As a young soldier, despite being trained to “kill”, he preached peace and unity at the least opportunity. He always ensures that every disagreement that arose in the course of duty or interactions with colleagues was handled without altercations and verbal vituperations.

During prayer sessions on Fridays often referred to in military parlance as “Padre Hour,” he stood out as a preacher of His Word. The accolades that he garnered from his preaching prowess have transcended after living service in 2019.

His level of intelligence and deep mental state of analysis of military tactics, public communication and media relations especially as an Instructor at the Nigerian Army School of Public Relations and Information (NASPRI), coupled with his communicative competence, stood out. No doubt, those tracts are manifesting outside service.

Henry Nkemakonam Benedict-Dikedi was born into the family of the late Pa Benedict and Mrs Omebe Benedict-Dikedi over 40 years ago. He served in the military for 19 years before he voluntarily retired in 2019.

Since his voluntary retirement from the Nigerian Army, PROF as often called by his colleagues has not relented in his efforts to be recognised outside the traditional wearing of military uniform for the good reason. Recently, his furore into gospel music has to bear good fruits with his recent release of two albums of 25 tracks of sonorous songs.

While drawing inspiration from the Bible, he told our correspondent that he ventured into music, besides other considerations – to be a winner of souls for Jesus Christ.

He explained, “The Bible says that he that winneth a soul is wise. So, my purpose on Earth is not to gain material things but to win souls for Christ Jesus. I wish to achieve that through Gospel songs, Benedict-Dikedi affirmed.

Henry-NBD reiterated that venturing into the music world especially as a gospel artist comes with multifarious challenges. Despite some shortcomings, he withered the storm and stood tall.

Through his dogged approach coupled with his spirit of resilience, he was able, at the same time to wax 25 songs into two tracks albums titled: “Marvelous” and “HIS MERCY” marketed and distributed by Danco Music International, Alaba International market, Lagos State, Nigeria. The songs were compressed into two albums. While the First album contains 12 songs, the second has 13 tracks.

However, at the moment, he explained that the first album has been released and is making positive rive in the market as he settled to hit the market with the second album.

Alluding to his favourite track, Henry-NBD pointed out that all the tracks are his favourite. However, the song titled: “NKEMAKINAM” is exemplary. The award-winning soldier and a 5-Time-United Nations Peace Medal Award winner noted that he used the song “to appeal to the conscience of parents to give their children names that will bring blessings to them in the future.

Adumbrating, Henry-NBD emphasized, “My kind of music is to appeal to the souls and conscience of people by giving them reasons to seek God their maker and turn from any act that may run contrary to the will of God.”

Asked the rationale behind his genre of music, he disclosed, “When you listen carefully to the lyrics of the songs, you will have cause to meditate on the Rhema (Word) of God which is Christ Jesus Himself.

“As you can see, most people don’t have time to go to Church or read the scripture, but my song has a way of administering the Word to their souls. Whether they are at the workplace, vehicle, at home or on the street, as soon as they hear or listen to my song, it will attract their attention and compel them to more and more to it.

“By so doing, gradually, the spirit of God would start talking to their subconscious mind and the end result would be repentance,” he reiterated.

While seeing himself as an Ambassador of peace, adding that his military career has also influenced his genre of music which was laced with religious trappings.

“My experience in the military has taught me that violence and war cannot broker peace anywhere in the world. We were taught to “shoot to kill” but at the same time, you can still use the military for peace enforcement and peacekeeping missions.

However, my closeness with my God and His Word (Bible) has motivated me a great deal.

“I am an advocate of gender equality and as a United Nations Peace Ambassador, I don’t only see women as builders of homes but as character builders and builders of nations. They are the most powerful influencer of men and they do play a vital role in peace-building than men hence they are blessed with good voices.

“You will agree with me that God in His infinite wisdom has blessed them with a good voice hence my resolve to propagate their Goodwill and also share in their agony or pains. I do feel the pains of mournful widows because my dear Mom is one of them. I know what they are passing through in life,” he added.

Explaining further, he reiterates, “You can see for yourself in the scripture when a woman was brought to be judged by Christ over adultery. But I ask, can a woman commit adultery alone without a man? What of the man that was caught in the act? Why would the punishment be for only the woman?

Benedict-Dikedi also condemned the idea of some communities and tribes’ inhuman treatment of women especially when they lost their husbands.

“Now, let me domesticate. In some traditions, when a married man dies, his wife would be subjected to all manner of degrading and inhuman treatment, and some are even compelled to drink from the water used in bathing the deceased person. This is pure barbarism. Beyond that, a lot of them in some tribes are denied possession of her husband’s properties, but when a woman dies; her husband would only be sympathized with, why?

While he decides to marry gospel music with another vocation he has found love in, Benedict-Dikedi retorted, “Remember, I have a Master’s degree in Peace Studies and Conflict Resolution, Master’s degree in Marketing and Public Relations coupled with other professional certifications from the United Nations institution. So, a combination of all these have made me embrace the Word of God and preach it through what I perceived as the best medium (Gospel song) and that is what found expression in the two albums,” Benedict-Dikedi reiterated.

As a soldier, Benedict-Dikedi was five times winner of the United Nations Peace Award for his contributions in maintaining world peace in Sub-Sahara West Africa. Professionally, the soldier turned gospel artiste is a certified Security and Protection professional; a Certified Chief Security Officer, a Certified Human Resource Manager, a Journalist, a Public Relations expert, a Peace Mediator and an author of books such as “Essentials of News and Media Quandary” and “The Whole Armour of Our Warfare.”

Also, he served as an Academic Instructor and Chief Librarian at the Nigerian Army School of Public Relations and Information (NASPRI), Bonny Cantonment and holds a Masters’s degree in Peace Studies and Conflict Resolution, as well as in Marketing and Public Relations. A Post Graduate Diploma in Public Relations, and currently a PhD student in view.

To add more flavour, he has over 32 Professional Certificates from the United Nations institution. As part of his contributions to human development, he has contributed articles to a number of periodicals, newspapers, and both local and foreign magazines, including NIGCON UNMIL, Defence and New Soja Magazines, Nigerian Tribune, and NASPRI magazine amongst others.

Have Faith in God by Sim Ubani ft Mavin

Balm of Gilead by TGod

All My Heart by Yomi

Moreflows brings you the best of entertainment, movies, politics, and fashion around the world
Contact us: moreflows247@gmail.com